The Austrian 4K 4FA APC series, aka the usMGSPz (Schützenpanzer/Überschweres MG) in the Austrian Army, the vehicle is a standard apc layout, engine front right, driver left, commander in the middle with a 12.7 mm (50cal.) M2 Browning MG with a shield giving some protection on his cupola or a 20mm cannon housed in a small one man turret. The crew compartment is in the rear of the vehicle and can carry 8 troops, four down each side of the vehicle on benches facing inwards and the troop leader has his own periscope. The troops exit the vehicle via two rear doors or the two hatches in the roof which can also be mounted with MG’s. It is lightly armoured offering protection of up to 20mm rounds/shrapnel.

The vehicle isn’t equipped with many modern systems and lacks an NBC system, however it does have 4 smoke grenade launchers and one of the drivers 3 periscopes can be replaced with a passive one for night driving.

Development by the former Saurer-Werke company of the APC series started in the 1950’s. Their first prototype was the 3K 3H followed a year later in 1959 with the 4K 3H, both using the Saurer 3H 200 hp diesel engine. Following the 4K 2P prototype, the 4K 4F entered production in 1961 based on the earlier prototypes layout but with a Saurer 2P 250 hp diesel engine.

After the production of 30 4K 4F, came the 4K 3FA with a 230 hp diesel engine of which 211 were manufactured. The 4K 3FA came in a number of different vehicles:

The 4K 4FA Then replaced production of the 3FA. Again the engine was replaced with a more powerful one, the Saurer 4FA 4 stroke 6-cylinder 250 hp diesel. It too came in a number of different vehicles: 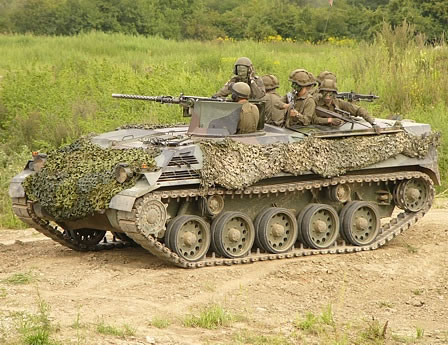 4K 4FA-G1 was the standard APC equipped with a 12.7mm (50cal.) M2 Browning MG with a shield giving some protection on the commanders cupola.
4K 4FA-G2 was the APC version which replaced the commanders cupola housing their 204GK 20mm cannon. It has an elevation of -12 to +70 degrees and has 100 rounds ready loaded in the turret. This vehicle has an increased combat weight to 15000kg and is designated the MK66SPz Schützenpanzer/Mashinenkanone 66 in the Austrian Army. 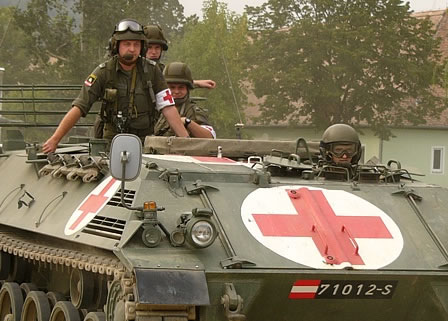 4K 4FA-San was the ambulance variant, 15 were manufactured. It is a 2 man crew (driver & medic) and could carry 6 injured troops. 2 were in stretchers on the left of the vehicle and 4 sitting on the bench on the right.
4K 4F GrW1 81mm Mortar Carrier (Austrian Army designation Granatwerfer-SPz) saw the crew compartment fitted with an 88mm mortar with an effective firing range of 180m to 5850m and a sustained rate of fire of 6 rounds per minute.

Production ended in 1969, with over 445 vehicles (includes 4F / 3FA / 4FA) manufactured in their various variants and is only in service with the Austrian Army.