The British AS90 Self-Propelled Gun Development

The AS90 was the replacement for the British Army’s ageing American designed M109 and FV433 Abbot 105mm artillery systems. Vickers Ship building Engineering, which was bought out by BAE Systems Land Systems in 1999, originally developed it in 1981. The 1981 project built a prototype 155mm turret designated the GBT 155. A new 155mm self-propelled artillery system project was started, and designated the AS-90, which stands for – Artillery System for the 1990s. Two prototypes were built in 1986 and entered in the British Army’s Abbot Replacement Competition.

The British AS90 Self-Propelled Gun Description

The AS90’s engine is a 660hp V8 diesel engine from Cummins, with a ZF Gears Ltd automatic transmission, with four forward and two reverse gears, giving it a top road speed of 55km/h and an operational range of 370km.

The AS90 is lightly armoured with an all-welded 17mm thick steel armour construction. However there is currently in development, new armour to allow the AS-90 to withstand anti-tank missiles and heavier rounds than its current protection against 7.62mm and 14.5mm armour piercing shells as well as 152mm shell fragments. It also has smoke dischargers and an NBC system.

The AS90’s are fitted with a 155 mm gun (39 calibre Length) main gun, which fires NATO L15 155mm projectiles with a range of 24.7km using conventional ammunition. The AS90 also fires Extended Range Ammunition rounds to 30km. It has a fire rate of 3 rounds in 10 seconds in burst fire, 6 rounds per minute for 3 minutes in intense firing and 2 rounds per minute for 60 minutes at sustained fire. It carries 48 rounds, 31 of these are stored in the turret bustle magazine.

The gun layer’s station is equipped with a Direct Fire Sight from Avimo (now part of Thales Optronics) for direct day and night firing. For indirect firing an Automatic Gun Laying System (AGLS) with electronic elevation and traverse drives, provide laying to an accuracy of 1 mile and rapid target engagement. The Layer’s Display Unit (LDU) was designed by VSEL. The commander’s station is equipped with a separate sight.

There is also a barrel cooling system to provide higher maximum firing rates in development. It also has a 7.62mm L7 GPMG mounted on the commanders turret for close protection.

The AS90 was upgraded with a Laser Inertial Artillery Pointing System, digital gun sight. The LINAPS provides the gunner with the position of the gun and the exact bearing and elevation of the barrel. It includes the FIN3110 ring-laser gyro based, strap-down Inertial Navigation Unit with embedded military Global Positioning System.

The AS90D is the desert version, with extra thermal protection for the 5 man crew and extra cooling for the engine and machinery. Tracks also received modifications.

The British AS90 Braveheart Self-Propelled Gun

BAE systems were awarded a contract to upgrade 96 of the AS90 to a 52-calibre Length gun to increase its unassisted range to 30 km and with long-range ERA ammunition to 40km. The project was cancelled by the British Army due to technical problems with the ammunition. It is assumed that the turret was modified to take the extra weight from the increase length of the main gun, changes to the breach and ammunition stowage, hence the name “Braveheart turret”.

The British AS90 Self-Propelled Gun Operators 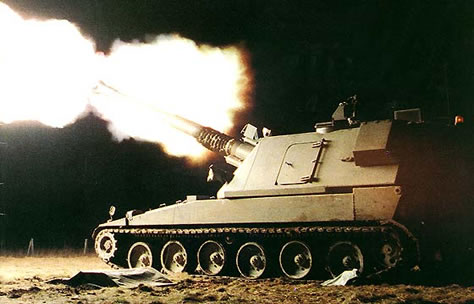 The Braveheart was trialled in Sweden and the turret fitted to a T-72 hull for trials in India.

The AS90 has not been exported as a whole vehicle to any countries, however the Braveheart turret is scheduled to be built under licence in Poland as part of their new Krab SPG using a German 155mm Cal Length 52 main gun.