Despite China’s size, it lacked indigenous tank development and production facilities until the mid 1950’s, when it received assistance from the Soviet Union (Russia) as both were communist nations.The Russians helped the Peoples Liberation Army construct 617 Factory, which was ready to manufacture tanks in 1956.

Russia had been manufacturing the T-54 from 1946 to 1958 (when production swapped to the T-55) and it was the T-54A that they gave to the PLA for licensed manufacturing for their first tank (the T-54A was also licence built in other former Soviet States).

The T-54A was a low profile medium battle tank, equipped with a Russian 100mm smoothbore, fume extractor and vertical gun stabilization system. It used a 520hp liquid cooled diesel engine. Knocked down kits of the T-54A were supplied to the PLA for assembly at 617 Factory, with the first assembled T-54A’s rolling out in 1958. The vehicle was accepted in to service in 1959 as the Type 59, with all future 59’s built from local Chinese materials/sources.

Type 59: Entered production in 1958, but without the IR searchlight of the Soviet T-54A.

Type 59-I: Entered service in1979, with a laser rangefinder (was mounted on the front of the turret), power-assisted steering, automatic fire suppression system, and track skirts. Its FCS and armour was changed/modified several times. It mounted a new 100mm rifled main gun.

Type 59-II Entered production in 1982 ending 1985 and was equipped with a copy (type 79) of the British L7 105mm main gun. Other improvements include new radio and fire suppression system. It was also equipped with a new 580hp diesel engine.

This is a upgrade package for the PLA’s existing Type 59 fleet that focused on improvements of firepower and protection, the package was fitted from 1995 onwards by 617 Factory.

indigenous FY series ERA plates on the front of the hull and turret. According to test results, the tank can survive a direct hit by the 105mm APFSDS round at a distance of 2000m.

The vehicle comes in two versions:

Both guns are capable of firing standard 105mm APFSDS, HEAT, and HEAT-FRAG rounds. When firing APFSDS rounds, these guns have an armour penetration capability of 600mm at a distance of 2,000m.

Both guns could also fire the 105mm gun-launched anti-tank guided missile, which has a maximum range of 5.2km and an armour penetration capability of 700mm.

Production of the vehicle ended in the late 1980’s, by which time 10000 had been built, with 6000 of them were delivered to the PLA and the rest being exported.

It served in the 1979 Sino-Vietnam border conflict, and was operated by the Iraqi Army in the  Iran-Iraq War and the Gulf War.

Janes have stated that the vehicle is operated by:

Iran – This nation operates a mishmash tank fleet. In order to implement a level of commonalty with its T-54 & Type 59’s, it has upgraded them with a copy of the 105mm rifled main gun as used on the M60 series, which also forms part of their tank fleet.

The vehicle has been upgraded with a V-46-6 V-12 diesel engine developing 780hp and is covered in a locally developed ERA armour and a new Slovenian FCS.

These upgraded Type 59’s have been locally re-designated as the T-72Z, which has no commonality to the Russian T-72 series.

Pakistan – This nation has been a prolific investor and licensed manufacturer of Chinese tanks for a number of decades. 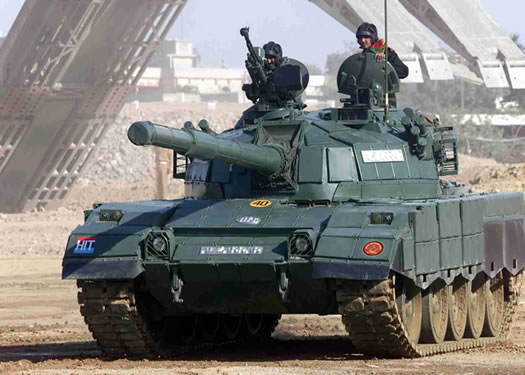 Its believed that Pakistan have operated a fleet of around 1200 Type 59’s. By modern standards the Type 59 is rather limited and with a withdrawal of these tanks could be a threat to the security of the country but also a timely and expense to develop a replacement. So the dissension was taken to implement an indigenous upgrade of the Type 59 to bring it to a more modern standard.

The first thing was to replace the old main gun with a new 125mm main gun, which is used on the licence built Type 85-IIAP and Al Khalid, both being Chinese vehicles, but with modifications for the Pakistani Army.

This not only increase the lethality of the tank so it can take on more modern tanks, but also reduces operational costs as it can use the same rounds currently used by other tanks in Pakistani service.

A new locally sourced composite armour covered in ERA has been fitted to the vehicle, as has a laser warning device to alert the crew to an anti-tank team “painting” the vehicle with a laser guidance system used to direct a an anti-tank missile on to a vehicle.

The vehicle is fitted with a 730hp diesel engine.

Heavy Industries Taxila of Pakistan developed the upgrade package in the 1990’s and are responsible for its implementation within the Type 59 fleet. Work commenced from 2003 and its possible that package could be added to Bangladesh’s Type 59 fleet. Upgrade Type 59 tanks are designated the Al-Zarrar.