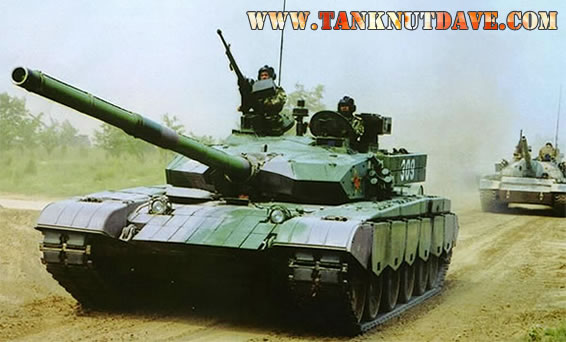 With the Sino Soviet split in full swing during the 1970’s, the PLA were concerned with its lack of a suitable MBT that could take on Russia’s modern T-72. Relying on its relationship with the West, China built a prototype codenamed 1224 based and using parts from the German Leopard 2. It was equipped with a 120mm smoothbore main gun, a hydro-mechanical transmission, torsion bar suspension and a German-made MB8V331tc41 diesel engine. Two further prototypes codenamed 1226 and 1126F2 were built with Chinese copied Leopard 2 parts including a diesel engine. The project was very short lived and in 1981 the PLA chose the indigenes Type 80.

The programme for a new MBT took of again in the early/mid 80’s favouring a similar design to the T-72. China managed to lay its hands on a unknown number of T-72’s from the Middle East and in 1989 NORINCO were tasked with the development of the new vehicle at 201 Institute and 617 Factory. A prototype were built on a modified extended T-72 hull, which was equipped with a Russian copied 2A46M 125mm smoothbore main gun and autoloader, as well as a 1200hp diesel engine. 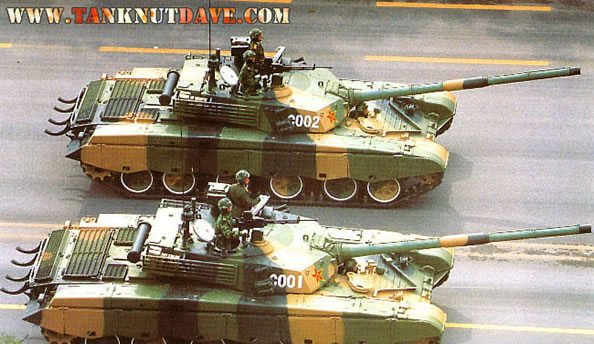 After China’s observation of the Gulf War which demonstrated the capabilities of the US M1-A1 and the British Challenger 1, an unknown number of the prototype were built with various modifications and changes ordered by the PLA through out the 1990’s. In 1998, the final design was accepted by the PLA and it was designated the Type 98 AKA ZTZ98. A limited number were built purely for the 1999 national day parade and were identifiable by their vertically faced frontal armour and 125mm main gun.

In the same year the vehicle received further up-grades – The armour was replaced with an arrow shaped modular armour system which can be inserted with various ceramic tiles. Additional ERA was fitted over the modules which complements the distinctive arrow shape of the welded steel turret. The ERA was also fixed across the front of the hull and a new 1500hp diesel engine was installed. It was temporarily designated the Type 98G and was accepted into PLA service in 2001 as the Type 99 AKA ZTZ99.

The main gun is a calibre length 50, 125mm smoothbore designated the ZPT98. The autoloader gives it a rate of fire of 8 round per minute and can carry 41 rounds in the turret. During the First Chechen War, many Russian tanks were lost when the spare rounds for the main gun were struck when the armour was penetrated. These rounds were stored in the turret crew/fighting compartment instead of being stored in separate armoured sections of the vehicle.

Despite being developed after the first Chechen War, the munitions in the Type 99 are surprisingly stored in the crew compartment of the turret like those Russian tanks used in the war, making the vehicle highly susceptible to the same catastrophic failure if penetrated.

The vehicle can fire HEAT, HE-FRAG and APFSDS which has a muzzle velocity of 1780 m/s. The tungsten core version can penetrate 850mm of steel whilst the DU version can penetrate 960mm both at 2000m. It can also fire the Russian 9M119 Refleks, AKA AT-11 Sniper shaped charge anti-tank missile, which has been manufactured under license by China since the mid 90’s. It has an effective range of up to 4km.

For close encounters, the vehicle has a coaxial 7.62mm MG (2000 rounds stored) mounted on the right of the main gun and a 12.7mm MG on the commanders cupola (300 rounds stored). A bank of 5 smoke grenade launchers are mounted either side of the turret and has a smoke generator.

The vehicle has a commanders day/night vision independent sight with a built in laser rangefinder and is located forward on the turret in front of his cupola, giving the vehicle a hunter killer capability and is manufactured by Jiangsu North Hugon Co Ltd. The gunners stabilised sight is mounted on the left of the turret, which has a day channel or thermal imaging and also has a built in laser rangefinder. The driver has 3 day periscopes, of which the central one can replaced with night vision.

The maximum speed by road is 80km/h and a reported 60km/h cross country. Acceleration from 0 to 32km/h takes 12 seconds. The transmission provides seven forward and one reverse gears thanks to its light weight of 54tons. 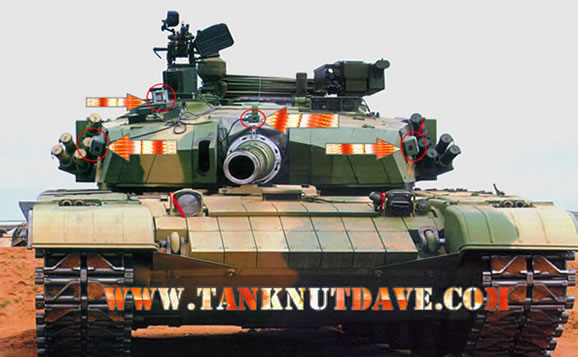 Since entering service the vehicle has had some up-grades, but like most up-grades/variants of the PLA its not completely clear outside of China nor set in concrete like western tanks, their status and numbers. These have included the 99G.

The vehicle is equipped with a laser warning system to alert the crew that an anti-tank missile guidance system has ‘painted’ the vehicle. It’s Laser Self Defence Weapon AKA LSDW is then activated and reported to be able to disrupt the laser/infrared guidance signal of the enemy missile, but then can also disable the enemy observation optics used to paint the vehicle and damage the eyesight of the enemy gunner. 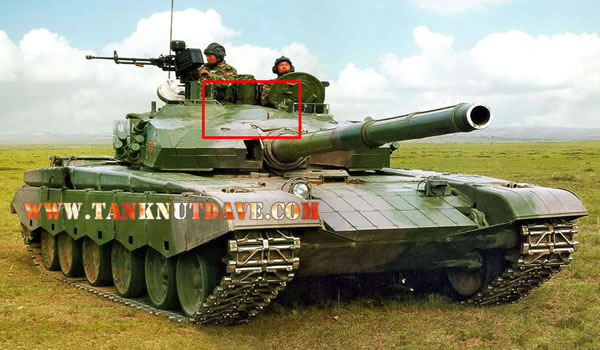 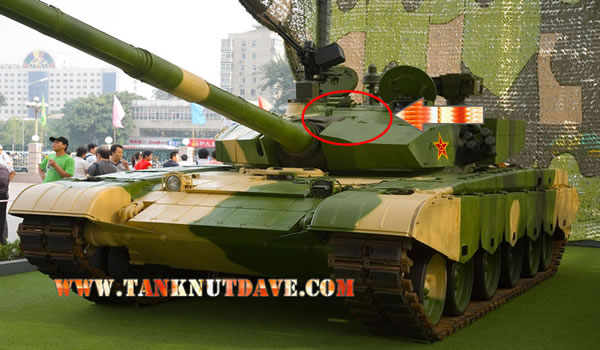 What is clear, is the A1 up-grade is in service. Its most noticeable and visible feature is the rounded “hump” in the turret roof area between the commanders and gunners cupola which extends towards the main gun has been removed and the roof reshaped into a flat area. Its speculated that either it was done to give the commander and gunner more operating room or more ceramic armour was added to strengthen the roof, levelling it out.

The future for the Type 99:

During 2009 a new version of the vehicle designated the Type 99A2 (which may very well be renamed!) is being developed and rumoured to be almost a completely new tank. In comparison to other PLA tanks, the 99 is extremely expensive to manufacture and its for this reason that it remains in limited numbers (estimated 200) and currently is only deployed by two elite armour regiments in Beijing and Shenyang Military Regions. Despite being the most advanced tank in the PLA, some of its systems have been added to the Type 96 (part of the Type 85 family), the more common tank in PLA service.