Since entering service with the German Army in 1995, the PzH2000 Self-Propelled Gun artillery system has also been successfully exported due to having the fastest rate of fire for modern Self-propelled gun’s and digital fire control technology as well as a Rheinmetall 52cal Length main gun for increased range and accuracy.

The PzH2000 manufacturer, German Firm Krauss-Maffei went on to developed the Artillery Gun Module (AGM) in 2004. Based on the extensive experience garnered with the PzH2000, the AGM is an unmanned, fully-automatic (it loads the breach of the main gun and lays it on to the target) and platform independent artillery gun module utilizing systems from the PzH2000, including its Rheinmetall 52cal Length main gun.

The ASCOD was developed by both the Spanish firm Santa Bárbara Sistemas and Austrian firm Steyr-Daimler-Puch, as an Infantry Fighting Vehicle. A family of vehicles was developed on the chassis and has also been exported to Taiwan and is due to enter service as the SCOUT SV with the British Army using a further developed chassis aka the ASCOD 2.

Both firms were later bought by GDLS and is now part of “General Dynamics European Land Combat Systems”.

The DONAR is a hybrid of the Krauss-Maffei AGM mounted on the GDLS (European) ASCOD 2 Chassis who also supply the armoured cab with which the two man crew (driver and commander) operate the AGM.

The DONAR offers a significant number of advantages for any future operators:

Higher mobility almost matching that of an IFV

An established and reduced cost munitions and parts

Greater strategic mobility as its air-portable via a A400M due to its overall light 31.5 tons weight, allowing the vehicle to be deployed with other rapid response vehicles and units. 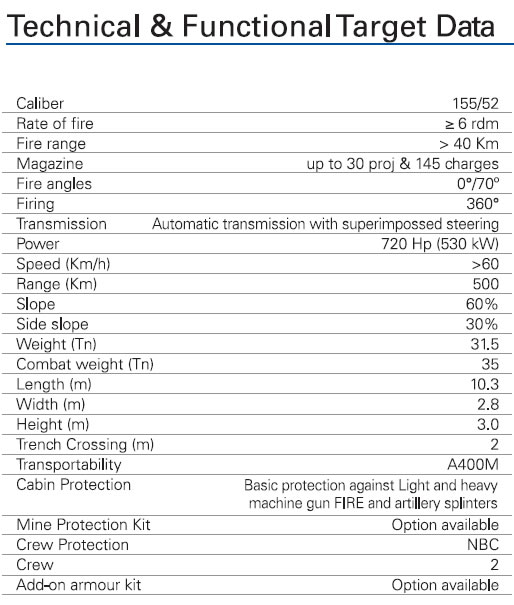 Currently there have been no orders for the vehicle.