The French CAESAR 155mm Self Propelled Gun is built on proven artillery systems such as the AMF3 gun, the 155 GCT AUF1 self-propelled gun and the 155 TRF1 towed gun, CAESAR is the optimum combination of their features.Versatility, mobility, easy to operate, combat readiness and survivability are the key features of this new 155 mm/52-calibre weapon system which is fully interoperable with the NATO 39 cal. equipment and 52 cal. JB MoU.

From a mobility and maintenance viewpoint, the self-propelled artillery systems are penalized both by their weight and their tracked chassis.Towed guns are disadvantaged in terms of manœuvrability and survivability by their size and their design. The genuinely versatile CAESAR as to it, fills the gap with the innovative solutions it offers and meets the operational requirements, whatever the conflict level, the theatre of operations and the nature of forces involved.

CAESAR can support all types of motorised, mechanised and armoured units, including rapid deployment forces.

CAESAR is effective in each fire mission such as: direct support fire, in-depth action fire, counterbattery fire and even in coastal defence missions.

Denmark – The Danish Army was in the process of acquiring 12 to 18 Archer Systems, but due to budget cuts the order has been cancelled. French papers reported during 2012 that Denmark “will definitely acquire 18 Systems (CAESAR’s) in a contract of around 90 million euros”. 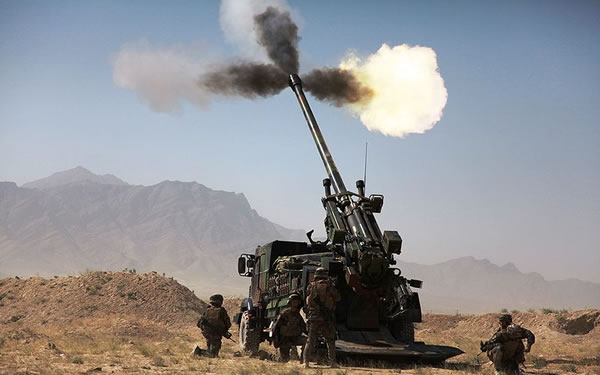 The French Army/Marines have deployed 8 CAESAR® artillery systems in Afghanistan since 2009.

Indonesia – 37 have been ordered (using a Unimog 6×6 chassis). The first delivery was completed in September 2012.

Lebanon – France have accepted to provide Lebanon with 28 CAESAR, financed by Saudi Arabia.

Saudi Arabia – In July 2006, an order for 80 systems was placed by the Saudi Arabian National Guard (SANG). These will be mounted on a Unimog 6×6 chassis. French newspapers report that the SANG have received a total of 132 CAESAR artillery systems.

Thailand – In April 2006, Thailand placed an order for 6 CAESAR systems for the Thai Army mounted on Unimog 6×6 chassis’s, which was the first export order for the system. In April 2011, the Royal Thai Army used the CAESAR against Cambodia’s BM-21 MLRS.

During Eurosatory 2010, Nexter presented the CAESAR Mk2. This version is equipped with a new armoured cab providing protection rated at ballistic level-2 and 3A/2B mine aggressions for the French Armies Sherpa 10 truck chassis.