Post World War 2, Italy’s tank production had been almost non-existent, relying on the purchase of the US Patton series. Production of the German Leopard 1 under licence by Italian firm OTO Melara in the early 70’s kick started the industry.

The Italian OF-40 Main Battle Tank was OTO Melara’s first export vehicle based on the lessons and experiences learned in licence building the Leopard 1 and is externally very similar in appearance and was marketed from 1977. The only country to purchase the vehicle was the United Arab Emirates who purchased 18 Mk1’s which were delivered by 1981 and an additional 18 Mk2’s with 3 ARV’s in 1985.

The vehicle is equipped with a 105mm rifle cannon developed by OTO and can fire all standard NATO rounds. It can be elevated from -9 degrees to +20 degrees. It has a coaxial 7.62mm MG and a 12.7mm MG on the roof for close encounters. The Mk1 had a modern Officine Galileo OG14LR fire control system (a laser range finder and ballistic computer), but lacked a stabilisation system for the main gun, limiting its ability to fire on the move. The Mk2 fixed this problem with a new stabilisation system and the improved OG14L2 fire control system. The vehicle carries 57 rounds of 105mm munitions (15 in the turret, 42 in the hull front left). 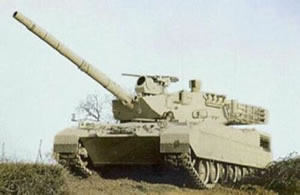 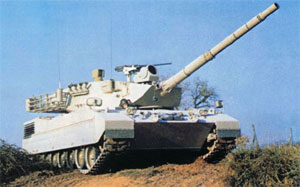 The vehicle is an all-welded steel and weights in at 43tons. Thou the armour system is not publicly known, its fair to estimate that its steel plate, a fact also supported by the limited time between licence production of the Leopard 1 and the OF-40 production, to develop a more effective system. It does have an NBC protection system along with a bank of x4 smoke grenade launchers on either side of the turret. 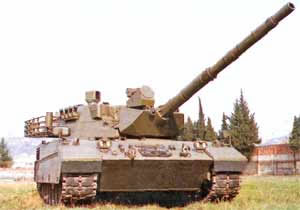 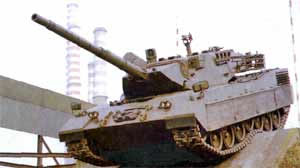 It has a 4 man crew with the standard layout, driver in the front of the hull on the right hand side (the engine is still in the rear of the vehicle) loader on the left of the turret, with the commander and gunner on the right.

Though the vehicle was demonstrated in other countries it was not purchased by any other countries other than the UAE, of which were all up-graded to the Mk2 and is no long marketed.