Thou some critics the Russian Ground Forces, for example the lack of support helicopters of their Main Battle Tanks, they have to be commended for their decision to provide their airborne services with an air deployable IFV, the BMD – Boyevaya Mashina Desanta AKA Боевая Машина Десанта, “Combat Vehicle of the Airborne”.

The Russian BMD-1 Infantry Fighting Vehicle was the first of a series to enter service in 1969 and was first seen in public in 1973. Thou sharing the same turret as the BMP-1, it is a smaller vehicle and most noticeable by its thinner trackers, 5 smaller perforated road wheels (BMP uses 6) and lack of side skirts.

The vehicle is an all aluminium construction with a maximum thickness of 15mm (hull) and turret armour is 23mm. It also has an NBC protection system.

Driver sits front centre.
Commander sits left of driver. He operators communications equipment, has observation periscope and operates the left BOW MG.
Bow gunner sitting right of driver operates the right BOW MG.
Gunner is located in the turret.
Troops are located in the rear of the vehicle and number 3. They exit through roof hatches.

The vehicle uses hydrogas suspension and a model 5D20 diesel engine, which generates 240hp, giving the vehicle a maximum road speed of 70km/h and range of 320 km. The vehicle is fully amphibious and propelled by two water jets in the rear of the vehicle.

Being the principal vehicle for the Airborne Forces, its essential that the vehicle could be deployed by aircraft in a ready state. The vehicle is loaded on a palette with 2 parachutes and a rocket engine. The first parachute deploys out of the aircraft which then pulls the palette out of the aircraft. Once clear, the second chute opens, slowing the palettes decent to the ground. As it descends, sensors on long rods dangle under the palette and once they touch the ground, they trigger the rocket which slows the decent so that the vehicle and its crew have a soft landing. Other crew who weren’t in the vehicle, but also parachuted in to the drop zone have a homing device to find their vehicle. 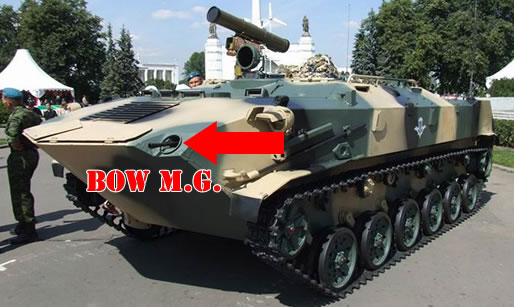 BTR-D saw its hull extended to include 6 road wheels to full fill the role of APC. it’s a turret less vehicle retaining the BOW MG’s and its roof is slightly raised. The increased internal volume means an increased troop carrying number, which varies between 10 to 12 (number needs confirmation). It was first seen in the Soviet War in Afghanistan during the 70‘s, but was better armoured than the BMD-1. 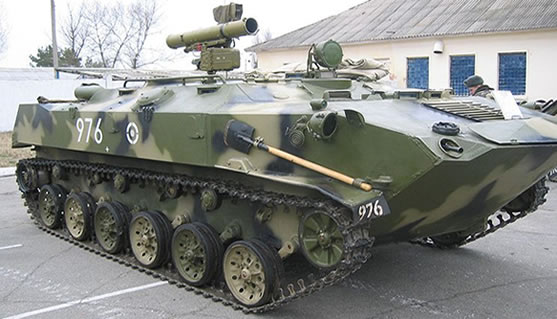 BTR-RD Robot is an anti-tank vehicle. It carries an anti tank team who have two 9P135M-1 ATM launchers, which they dismount with or mount one on the top of the vehicle. They can fire a number of Russian Wire Guided Missiles.

BTR-ZD is the Anti-Aircraft vehicle of the family. It tows the ZU-23 AA gun or it can be mounted on the roof of the vehicle. The AA gun is a 23mm twin barrelled weapon designed to engage low flying targets, but during the Soviet War in Afghanistan, it proved successful at engaging and suppressing ground targets. The vehicle also operates in a second role by carrying two MANPAD teams (Man-portable air-defence systems). Its internal space has racks for spare Shoulder mounted missiles.

2S9 NONA is in essence a BTR-D APC, which is based on the BMD-1 with a turret housing a 120mm bore calibre 2A51 mortar. The Nona mortar is different from other mortars, in that it is fitted with a breech (rather than the round being dropped in from the top, the round is loaded at the bottom of the mortar where the breach is). The breach is loaded by way of an automatic rammer which forces compressed air into the breech to clear fumes.

The turret, unlike many others doesn’t have a full 360 traverse (turn). Its limited to 35 degree’s left and right. The mortar can be elevated -4 to +80 degrees, giving it a range of 8.8m and 25 rounds can be stored in the vehicle.

The vehicle uses hydrogas suspension and a model 5D20 diesel engine, which generates 240hp, giving the vehicle a maximum road speed of 60km/h and range of 500 km.

BMD-1P with Sagger removed and fitted with an AT-4 Spigot wire-guided ATM on the turret roof. 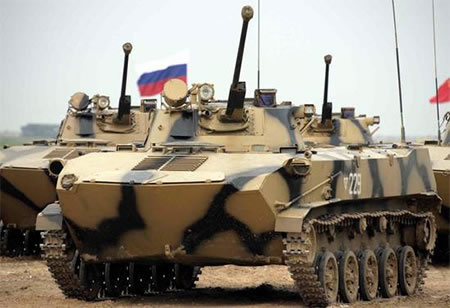 BMD-2 was an upgraded BMD-1. In entered service in 1985 and had some pro’s and con’s. The con’s were that the armour was thinner but the pro’s was the introduction of the BMP-2 30mm auto cannon in a modified turret. The advantage of the 30mm was its ability to engage non armoured vehicle targets and that it was belt fed so could attain a higher elevation to engage targets in the mountain area’s the Russian Airborne found themselves fighting in during the Soviet War in Afghanistan.

Angola
Armenia
Azerbaijan
Belarus
India
Iran?
Moldova
Russia Estimated that about 715 in active service and more than 2400 are in storage
Ukraine
Uzbekistan