MTU-12 (Tankoviy Mostoukladchik) – Bridge-layer tank equipped with a 12 m long single span bridge with a capacity of 50 tonnes. It entered service in 1955; today only a very small number remains in service. It has a combat weight of 34 tonnes. 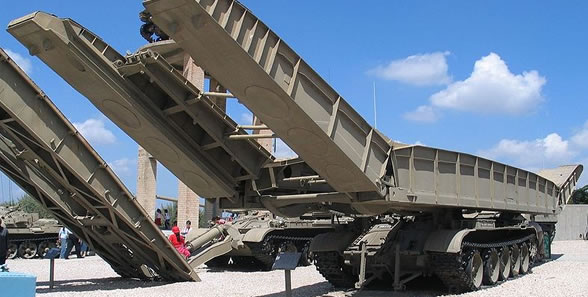 MTU-20 (Ob’yekt 602) (Tankoviy Mostoukladchik) – T-54 converted into a bridge-layer tank. It has a twin-tread way superstructure mounted on a modified chassis. Each tread way is made up of a box-type aluminium girder with a folding ramp attached to both ends to save space while the bridge is in the travel position.

The vehicle with the bridge in the travelling position is 11.6 m long. When set up the bridge is 20 m long. This is an increase of about 62% over that of the older MTU-1. The bridge is launched using the cantilever method. First the ramps are lowered and fully extended before the tread ways are forward with the full load of the bridge resting on the forward support plate during launch.

The span is moved out over the launching girder until the far end reaches the far bank. Next the near end is lowered onto the near bank. This method of launching gives the bridge layer a low silhouette which makes it less vulnerable to detection and destruction.