Growing up as a teenager through the Cold War in the 1980’s, I remember the concern the West had when watching the BBC newsfeeds of the batteries of Scud’s the former USSR were capable of firing from their TEL Launchers at West Europe.

The USSR had developed ballistic missiles that followed a sub-orbital flight path based on captured Nazi V2 rocket technology in the pre-war years known as the R-1 and R-2 missiles.

During the 1950’s Russia developed a successor to these known as the R-11 and its first flight was in 1953. The new missile was designated the Scud A in NATO and entered production in 1955.

The successor to the R-11, the R-17 (SS-1C Scud-B), renamed R-300 in the 1970s, was the most prolific of the series, with a production run estimated at 7,000. It served in 32 countries and four countries besides the Soviet Union manufactured copied versions. The first launch was conducted in 1961, and it entered service in 1964.

The R-17 was an improved version of the R-11. It could carry nuclear, chemical, conventional or fragmentation weapons.

The Makeyev OKB also worked on an extended-range version of the R-17, known in the West as SS-1d Scud-C, that was first launched from Kapustin Yar in 1965. Its range was brought up to 500–600 km, but at the cost of a greatly reduced accuracy and warhead size.  it apparently did not enter service with the Soviet armed forces.

The R-17 VTO (SS-1e Scud-D) project was an attempt to enhance the accuracy of the R-17. The Central Scientific Research Institute for Automation and Hydraulics (TsNIAAG) began work on the project in 1968, but the first test launch was conducted only in September 1979. Development continued through the 1980s until the system was accepted into initial service as the 9K720 Aerofon in 1989.

However, by this time, more advanced weapons were in use, such as the OTR-21 Tochka(SS-21) and the R-400 Oka(SS-23), and the Scud-D was not acquired by the Soviet armed forces. Instead it was proposed for export as an upgrade for Scud-B users, in the 1990’s.

The next development would be of the system with which to transport and launch the Scud missile. Known as TEL, this standards for Tractor, Erector and Launcher. 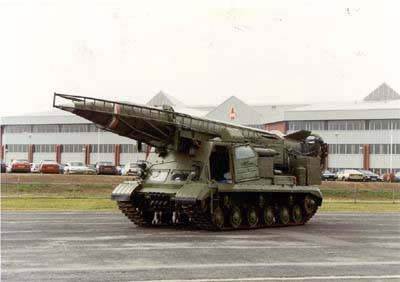 The first TEL (pictured above) were based on the ISU-152 tank chassis and entered service in 1955. Only 100 of these TEL’s were built.

By 1960 a new wheeled TEL based on the MAZ-543 8×8 truck was being developed. Scud technology of this era had been susceptible to damage through vibrations inflicted by their transportation by tracked vehicles, so the new wheeled TEL offered many advantages in the transportation. The new TEL was designated 9P117 Uragan (Hurricane) but nicknamed the Kashalot by its Russian crew’s due to its size. 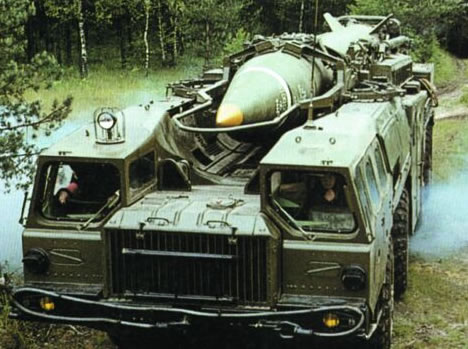 The TEL accommodates one Scud and the launching mechanism is located along a cavity running along the middle of the TEL.

Behind the APU are two control cabins. The right houses the targeting controls.

The erector consists of two hydraulic operated arms with which the Scud is sandwiched between and a base launching plate. When the missile is ready to fired, the arms raise into a vertical position with the base plate on the ground, pointing the Scud into its sub-orbital flight path.

During the Cold War the system was fully practised as to the point of launching by the former USSR in preparation of defending against a Western invasion and the missile testing equipment is housed in the right crew compartment, whilst the fire safety firing switches are in the left hand crew compartment.

The successor to the R-11, the R-17 (SS-1C Scud-B), renamed R-300 in the 1970s, was the most prolific of the series, with a production run estimated at 7,000. It served in 32 countries and four countries besides the Soviet Union manufactured copied versions. The first launch was conducted in 1961, and it entered service in 1964.

The R-17 was an improved version of the R-11. It could carry nuclear, chemical, conventional or fragmentation weapons.

During the 1979-89 War, the former USSR supported the communist efforts against the Mujahideen. The USSR fired over 1000 Scud against Mujahideen supporting Villages.

Libya responded to U.S. airstrikes in 1986 by firing several Scud missiles at a U.S. Coast Guard navigation station on the nearby Italian island of Lampedusa.

Iraq became a prolific operator of Scud and fired many against Iran during the continuing 8 year war.

At the outbreak of the Gulf War, Iraq had an effective, if limited, ballistic missile force. Besides the original Scud-B, several local variants had been developed. These included the Al-Hussein, developed during the Iran–Iraq War, the Al-Hijarah, a shortened Al-Hussein, and the Al-Abbas, an extended-range Scud fired from fixed launching sites, that was never used. The Soviet-built 9P117 was the prime launcher, along with a few locally-designed TELs, the Al Nida and the Al Waleed. 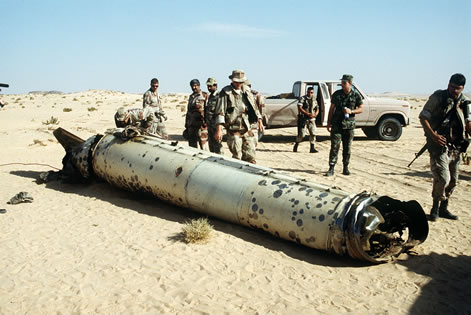 Downed Iraqi Scud by a US MIM-104 Patriot SAM

The former Iraqi dictator Saddam Hussein fired Scud missiles in to Israel in the hope that he could provoke the IDF so that they would join the War and as a result, the Arab nations contributing to the coalition to oust him from Kuwait would fall to bits.

During the 1994 civil war in Yemen, both South Yemen separatists and government forces fired Scud missiles.