The famous T-34 Medium Tank came about as a result of M. I. Koshkin’s argument that the T-32 Medium Tank should be capable of performing all the tasks of the BT fast series, the T-26 Infantry Support Tank and T-28 Medium Tank. It wasn’t until after the battle experience gained against the Finns during the Winter War, that the Russians realised they needed a heavier armed and armoured tank. Koshkin was able to show that the T-32 could be up-armoured, and thus the T-34 was born.

The first prototypes underwent stringent testing from the end of 1939. The first T-34 left the production line at the Kharkov plant in June 1940. Production continued at a number of factories, initially at Leningrad, Kharkov and Stalingrad. Later, the Leningrad and Kharkov factories had to be moved to a location beyond the Ural Mountains, as the Germans advanced into Russia during Operation Barbarossa. These two factories merged into one to form Russia’s largest tank production facility, called Tankograd. Famously, the Stalingrad factory continued to produce T-34s even during the great Battle of Stalingrad, and it is said that tanks rolled off the production lines and went straight into battle there!

The T-34 came as a complete shock to the invading German forces, who regarded the Russians, and all other Slavic peoples as being ‘Untermenschen’, or sub-human. The T-34 incorporated a number of innovative features. It had sloped armour on its hull and turret, was fitted with Christie type suspension, which gave it superb cross country performance, and was armed with the excellent 76.2mm gun. This same gun was also fitted to the KV1 Heavy Tank. These features meant that the T-34 was superior to anything that the Germans had at the time, i.e. the PzKpfw III and IV.

The T-34 was very simple, but robust in its construction, and was a ‘no thrills’ design which could be mass produced in vast numbers. In fact, the T-34 is the 2nd most produced tank of all time, with its successor, the T-54/55 being the most produced. Well over 40,000 T-34s were produced during the ‘Great Patriotic War’ and the tank continued to be built after the war as well.

T-34/76 B, had a rolled-plate turret and new L/40 76.2mm gun. Later tanks had all steel road wheels because of the shortage of rubber.

T-34/76 C, had a larger turret with two hatches instead of one, better vision devices, larger tracks and an armoured sleeve for the bow MG. The two new turret hatches gave rise to the T-34 being nicknamed ‘Mickey Mouse’ because when both hatches were opened, they looked Mickey Mouse’s ears!

T-34/76 E, as for D, but of all-welded construction, commander’s cupola and better engine cooling.

The weight of the T-34/76 increased from the initial version’s 28 tons, to 30 tons in the later versions, However, in spite of the increase in weight; the top speed also rose from 28mph, to 31mph.

As well as the T-34/76 versions mentioned above, there were also the usual command and flamethrower versions as well. 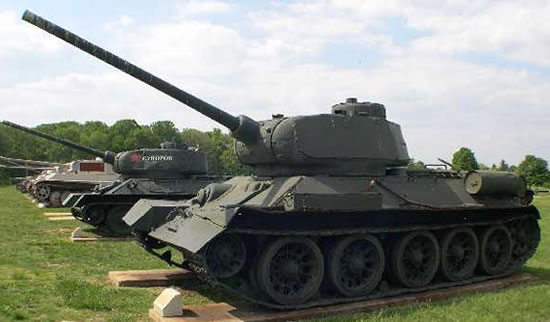 After the Germans had introduced their Panther Medium and Tiger Heavy Tanks, the Russians realised they needed a bigger gun to combat these new tanks. After an extended period of work and trials, the 85mm Zis-S-53 gun was chosen. Like the German 88mm Anti-Tank gun, the 85mm was based on an existing Anti-Aircraft gun. The 85mm was fitted into a modified turret from the KV-85 Heavy Tank and the new tank, designated T-34/85, entered production in 1944 and continued to be built long after the war had ended.

The T-34 served in all the major battles on the Eastern Front, including the biggest tank battle in history; at Prokharovka during the Battle of Kursk. 1393 Russian and German tanks and assault guns faced each other in the southern sector of the Kursk Salient. The resulting battle saw the Russians lose more tanks than the Germans, but these could be easily replaced, and the battle served to halt the German advance. So although Prokharovka was a tactical defeat for the Russians, it was a strategic victory. From this point on, the Germans were in retreat, all the way back to Berlin.

The T-34/85 also served with the North Koreans and Chinese during the Korean War, and went on to continue serving with Third World countries for many years afterwards; the tank being perfectly suited for smaller armies on tight budgets.

Although the T-34 was undoubtedly one of the outstanding tank designs of World War 2, it, like a lot of other tanks of the period, wasn’t without its problems. One of these problems was the 2 man turret, which increased the tank commander’s work load, there was also very little crew comfort because of the ‘no thrills, conscript-friendly’ design of the T-34. Another problem was the lack of radios, which meant that battlefield command and control was very difficult. However, in spite of these problems, the T-34 was one of the most important tank designs of the war, if not of all time. It can be regarded as a direct ancestor of today’s Main Battle Tanks.