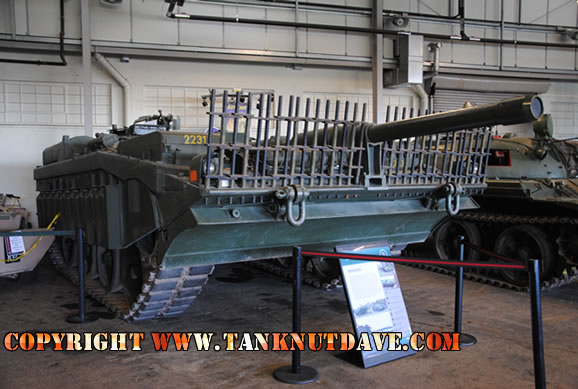 Many people call the 103 S series (aka The S Tank) a tank destroy, simply because it does not have a turret. However this is incorrect. Tank destroyers carry anti-tank cannons that are too large to fit in to turrets and have limited mobility. The lack of a turret on the 103 S is a deliberate design feature and not a result of a large anti-tank cannon.

The Swedish Arms Administration had conducted research in to what parts of tanks were hit when fired upon. The research showed that the turret and main cannon received the highest percentage of hits, but hardly any hits were made below 1m. It was for this reason that the Swedes did away with the turret for their new tank.

The 103 entered production with Bofors in 1967 and production ended in 1971. Three hundred were produced in total and was only adopted by the Swedish Army who equipped three armoured brigades with 72 tanks each and two further independent tank battalions.

It mounted the British L7 105mm main gun (aka L/62) and was equipped with an autoloader, which stored 50 rounds, which gave the vehicle a respectable firing rate of 10 rounds a minute and was able to fire APFSDS and HESH rounds, empty cases where then automatically ejected from the rear of the vehicle. The main draw back of not having a turret was the vehicle couldn’t fire whilst on the move. This has mean’t that the vehicle could only serve as a defensive MBT rather than a offensive MBT, as used by other countries.

To aim the maingun the tank had to pivot on its tracks from left to right. To adjust its elevation it used a new radical suspension system. The hydro pneumatic system allowed the tank to raise its elevation from 10° to +12° by raising the height of the forward road wheels and lowering the rear and opposite to lower the elevation. 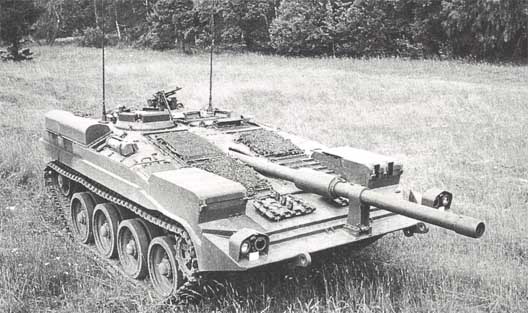 Another interesting design point about this vehicle was the crew. Though It was equipped with an auto loader it originally only required two men to operate it, but this was increased to three. The third crewman became the radio operator and rear driver and faced the rear of the tank. His position was equipped with the same equipment as the forward driver, so if the vehicle needed to retreat from a confrontation, the rear driver would take over and drive the vehicle in reverse (but appeared forward to him) so that the stronger frontal armour was always facing the enemy. The front driver was also the gunner and sat on the left of the vehicle and the commander on the right. The 103 was equipped with 8 smoke grenade dischargers, two 7.62mm coaxial mounted MG’s and a third mounted on the commanders cupola.

The original 103 was equipped with two engines, a multi-fuelled Rolls-Royce K60 for general operation and a Boeing 553 gas turbine, which was used to aid with cold weather starting and extra power when driving cross country. With this and its light weight of just under 40 tons, the vehicle has a top speed of 50km/h and an operational range of 390km. The Rolls-Royce powerpack was mounted in the front of the vehicle and secondly served as a form of frontal armour.

The 103 was also equipped with its own built in water floatation device for crossing the many waterways across Sweden. The vehicle could be prepared with in 20 minutes and had a top speed of 6 km/h in water, which was powered by the tracks.

Though the type of main armour is not known, it also was equipped with a vertical front piece of cage armour, which was to be mounted during wartime. An additional source of armour was the front dozer blade, which was used to dig it self in.

The first was the 103B S. This was done during mid production and saw the original Boeing 553 gas turbine replaced with a more powerful Caterpillar 553 gas turbine, which generated 490 hp. It also saw the standardisation of the floatation device and dozer blade on all vehicles.

The next was the 103C S. This was started in 1986 through to 1988. The Rolls-Royce K60 was replaced with a new Detroit diesel 6V53T, which generated 290 hp, and up-grades were made to the fire control system. The 103D S was a proposed up-grade, but only one was up-dated as a prototype.