Being a member of the former Soviet Union & a key industrial state, Ukraine built a number of tanks under licence during the Cold War period and one of these was the T-80. Seeing the problems the gas turbine engine caused for the Russian T-80U, the Ukraine further developed the vehicle (under the leadership of Nikolay A. Shomin) based on the Izdeliye 476 tank and the running gear of the T-80.

In 1985 production begun at the State Enterprise Malyshev Plant (now known as Kharkiv Morozov Machine Building Design Bureau AKA KMDB) of the T-80UD (though a large numbers of the components were supplied by Russia), the key difference being the replacement of the gas turbine with a diesel engine, hence the ‘D’ in its re-designation.

The new engine is the multi-fuel two-stroke turbo-piston 6TD-1 6-cylinder diesel, which generates 1000hp. It provides an increased range over the T-80U. The air inlet for the new engine allows air to be ducted from the least dusty part of the vehicle and the two parts to the air filtration system, the centrifugal pre-cleaners and the air cleaner casing, aid the vehicle in water fording to a depth of 1.8m (5m with fording equipment) and further increase its operational range in hot climates up to 1000km without the need to change filters. The top of the engine compartment is fitted with special heat insulation to reduce the heat given of by the engine, thus reducing its thermal signature.

The suspension is torsion bar which is covered with a skirt and the forward part is under ERA armour. To reduce dust kicked up by the vehicle, a large rubber matt is hung at the front of the vehicle. The vehicle has as standard, a very basic dozer blade so it can dig its self a scrape to lie up in, within 15-40 minutes depending on the type of ground. Anti-mine equipment can be installed, such as the KMT-6 plough-type system and KMT-7 roller-type system. The range of the vehicle can be extended with two additional fuel drums at the rear of the vehicle.

The vehicle uses composite armour and ERA in order to keep the weight of the vehicle down. The vehicle has a standard NBC system and fire detection/suppression system.

The main cannon is the 125mm KBA3 smoothbore cannon with a cal length of 48 and is fitted with a thermal sleeve and fume extractor. The cannon uses two-part munitions and can carry 45 rounds (APFSDS, HEAT & HE-FRAG), 28 of these are kept in the vehicles autoloader, reducing the crew to three.

The vehicle is equipped with a guided missile system. A laser guided, tandem charge, ATM can be fired from the main cannon with an effective range of 5000m. It’s reported to be able to engage hovering helicopters and concrete emplacements.
Russian tank cannons and their derivatives have a much poorer accuracy compared to Western tanks, hence the added ATM capability to increase the vehicles lethality. Some say it’s the quality of the main cannon, whilst others say the quality of the tank rounds are poor, or both.

The vehicle is able to generate its own smoke screen by injecting diesel fuel in the engine exhaust and is also equipped with a bank of four electrically operated smoke grenade launchers on either side of the turret.

1V528-1 ballistic computer – uses inputs from the sensors measuring tank speed, crosswind speed, target range, and course angle, will other information has to be manually inputted such as ambient air temperature, charge temperature, barrel wear, ambient air pressure. It is also able to calculate when the high-explosive fragmentation projectile with controlled detonation should be detonated over the target. It also has fire gating capability. This means the main cannon will only fire when the misalignment between the line of sight and the gun bore axis is within pre-determined limits, after the gun firing button has been pushed. The fire gate size is adjusted when calibrating the fire control system after installing it in the tank.

Gunner’s 1G46 day sight, gunner’s TO1-KO1E night vision system – the sight is stabilised for line of sight and incorporates a laser range-finder and a missile guidance capability. For export models option, the Buran-Catherine-E thermal imaging sight can be fitted.

PZU-7 anti-aircraft sight & 1ETs29 anti-aircraft machine gun mount control system – Used to control and engage the 12.7mm MG against hovering anti-tank helicopters.
The Ukrainian Army of 2005, have 271 T-80UD’s and is also in service in Russia. 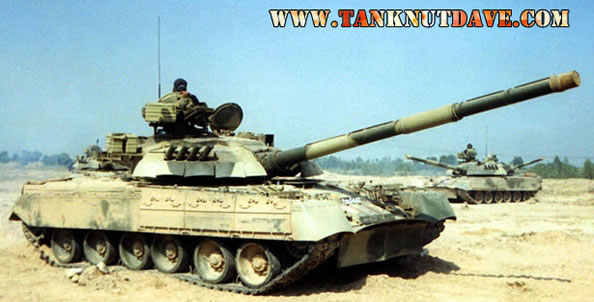 With the collapse of the USSR, Ukraine inherited a stock pile of 300+ T-80UD’s which were left at the Ukrainian factory. In 1996 Ukraine signed a deal to sell 320 of the vehicles to Pakistan. Some deliveries were made despite objections from Russia, who claimed the vehicle was in fact a Russian vehicle and refused to supply the Ukraine the parts to modernise the tank to the agreements promised standard. How ever the Ukraine had been developing their first tank to rely almost completely on indigenes parts, the T-84, so used parts from that vehicle to complete the production and delivery to the Pakistani Army in 1999, totalling 320 vehicles.

The following key support vehicles can also be supplied to provide the T-80UD MBT with technical and logistic support during its operational life:

The T-80UD design has now been surpassed with the T-84.