The US M88 Armoured Recovery Vehicle Series Background and development

The M88 is a US designed and built Armoured Recovery Vehicle built on the chassis of the US M48 (A2) Patton medium tank by the former Bowen McLaughlin York, which went through a number of buy outs and mergers and is now owned by BAE Systems Land and Armaments. The M88 was to replace the M74 medium duty recovery vehicle, with the goal of using as many parts in in its construction from the new M60 MBT. Three prototypes designated T88 were built and followed by 10 pre-production vehicles for troop trials, which they successfully passed and the US Army ordered 1075 of the new vehicles designated “M88 Recovery Vehicle” in 1959.

First introduced to the US Army in 1961 and production finished in 1964. It went on to serve extensively during the Vietnam War. It proved a capable ARV but the armour around the crew didn’t prove as successful.

By 1975 5 new prototypes were built of a new version focusing on the replacement of the gasoline engine with a new diesel Continental AVDS-1790-2DR 750 hp (559 kw) air-cooled, 12-cylinder, 4-cycle engine, following the dieselization of the US Army tactical vehicle fleet. It’s max road range was extended from 360 to 450km. A new auxiliary power unit was added and stowage space for a small quantity of LAW ATM’s were also included as well as a diesel-fired personnel heater.

Back up systems were also added to the main winch cable, adjusting the angle of the boom and spade could now be done the auxiliary power unit, should the main hydraulic system of failed. The prototypes were acccepted and by 1977 it was entering service with the US Army as the M88A1. 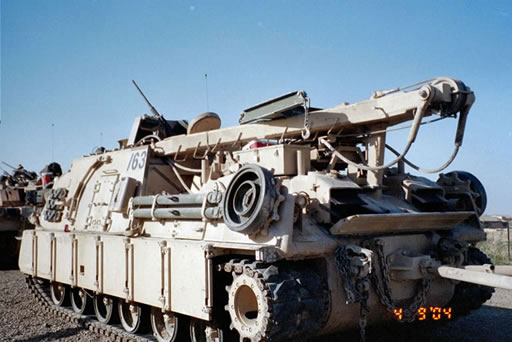 The M1A1HA Abrams throws a spanner in the works!

With the up-grade from the M1 Abrams to the M1-A1 in 1985 and its subsequent increased weight, the M88A1 was found to be lacking in power to tow the tank, as it had been developed to tow & recover the M60 series. In August 1986, the US Army approved the development of a product improvement to the M88A1.

This vehicle was called the M88A1E1. The engine was upgraded, as were the winch and hoist capacities, it had increased tow/breaking performance, better armour protection for the crew, an upgraded suspension system, power-assisted brakes and an improved hydraulic system. The E1 development was dropped in favour of funding for the M109A6.

The development was picked up again in 1991 under the new designation M88A2 HERCULES which entered service with the US Army in 1997.

The M88A2 has a new longer boom capable of hoisting 35 tons. The main winch is 280ft long and capable of pulling 63.5tons and for extra muscle it has an auxiliary 3 ton winch. The M88A2 has a new AVDS 1790-8CR with 1050 hp engine to cope with its increased weight to 70 tons. This is partly due to its increased physical dimensions of 8.6 x 3.7 x 3.2m from the older M88A1’s 8.3 x 3.4 x 3.2 m. The Hercules also has improved hydraulics and heavier suspension, along with better armour protection and ballistic skirts. The crew of 4 has now been reduced to 3.

For close protection the vehicle still has the .50 mounted MG and smoke grenade launchers & an NBC system which were both introduced on the M88A1.