The Swiss firm MOWAG developed a series of 4×4, 6×6 and 8×8 wheeled troop carriers for the Swiss Army commonly known as the Piranha during the 1970’s. Their order books have expanded to include international purchases from many other nations Armies and includes the licenced production during the 1970’s of their 6×6 vehicle by GM Defense for the Canadian Army, who designated it the Armoured Vehicle General Purpose AKA “AVGP”.

The success of the series has been its high mobility and adaptability to serve other mission roles.

Development of the The USMC LAV-25

In September 1981, GM Defence was awarded over 3 million dollars to build 4 proto-type LAV II vehicles for evaluation by the US Marine Corp & Army, as a future Light Armoured Vehicle. All four vehicles mounted a Arrowpointe two manned turret, one with a 25mm M242 Bushmaster chain gun, while the other three mounted a 90mm Cockerill MKIII main gun, whilst all mounted a co-axial M240C 7.62mm MG. After field-testing both weapon systems, the Bushmaster was selected and GM Defence won the contract in 1982 and production began, however in 1984 the US Army cancelled its order and a total of 758 were built for the USMC. Final deliveries to the USMC were completed in 1987.

Mounted with a Arrowpointe two manned turret with a 25mm M242 Bushmaster chain gun (as used on the M2 Bradley), co-axial M240C 7.62mm MG and a pintle-mounted M240C 7.62mm MG. The vehicle carriers 1740 7.62mm rounds. The 25mm is fed from two bins, totalling 210 rounds and an additional 210 rounds are stored in the vehicle. It fires M791 Armour Piercing Discarding Sabot-Tracer and M792 High Explosive Incendiary Tracer rounds. Its operated by a 3 man crew and carries 6 infantry soldiers. 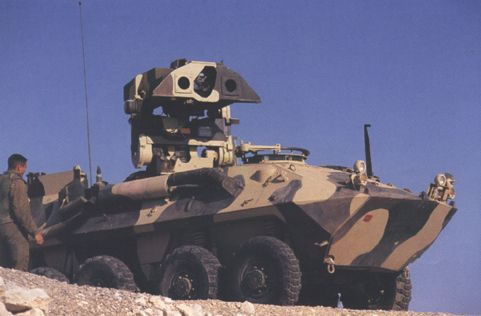 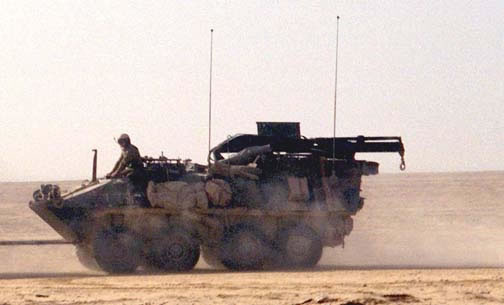 Its layout is conventionalFitted with a standard boom crane, which can turn 265° and winch for recovering LAV vehicles. It also carries a pintle-mounted 7.62mm M240E1/G for self-defence and carries 1000 rounds for it. It carries a crew of 5., with the turret positioned centrally in the vehicle. The driver sits on the left with the engine on the right, whist the infantry men sit in the rear of the vehicle on bench’s, three on each with their backs facing the hull sides. They are deployed from two doors at the rear of the vehicle, which open outwards and have a small viewing port in each, with an escape hatch, which is believed to be in the belly of the vehicle. 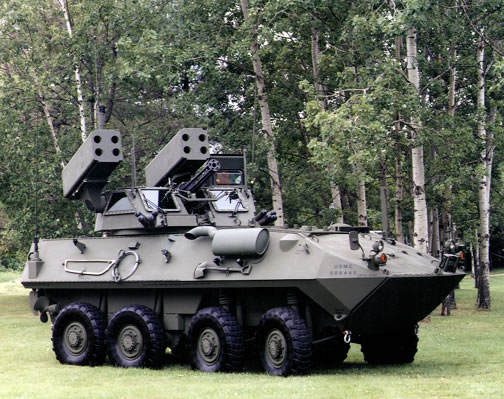 Equipped with the General Electric Blazer system, it’s turret is made up of two missile pods which each house four Stinger SAM’s. The turret also mounts the GAU-12/U Equalizer five-barrel 25mm Gatling gun.

Logistics – Run by a two-man crew, this high roofed vehicle is used for moving cargo around the battlefield and is equipped with a crane for doing so. 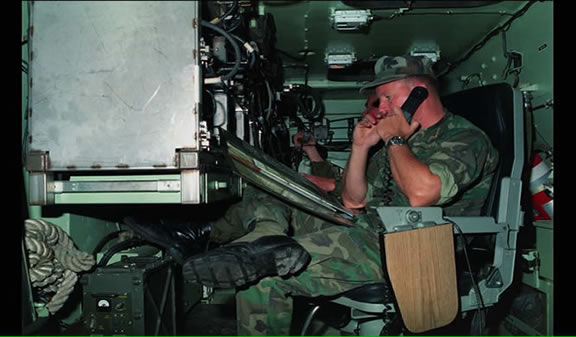 The hull is all welded steel and whilst not strongly armoured, it offers protection from small arms fire & shell fragments and is fitted through out with an NBC system. There are two sets of 4 smoke grenade dischargers, one mounted on each side of the turret. 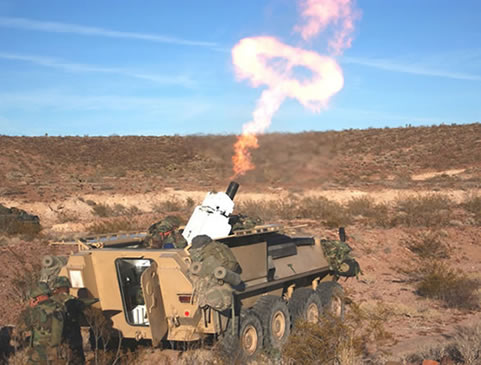 A 81mm M252 mortar is mounted on a turntable, which can turn 360° in the centre of the vehicle. The turret has been replaced with two large roof hatches, which are opened whilst firing the mortar. The 5 man crew uses a pintle mounted M240E1 MG for self-defence and carries 1000 rounds for it and 99 mortar shells.

The turret is fitted with laser ranging equipment, thermal viewing and full night vision equipment, as is the driver’s position.

The vehicle is fully amphibious and is powered by two rear propellers mounted at the rear with the four rudders. It takes three minutes to erect the frontal trim and the bilge pumps are activated prior to its entry in the water.

Its powerpack is the engine diesel Detroit 6V-53T. The vehicle can be 8×8 but generally is driven with power to the rear four wheels to improve fuel efficiency, whilst the front four are always used for steering giving the vehicle a top road speed of 100km/h.

The LAV-25 first saw action with the USMC in 1989 during Operation Just Cause in Panama. It then went on to serve in the Gulf War, Kosovo and the Invasion of Iraq.

The LAV-25 is going through an up-grade program. These up grades include:

Installation of a internal fire suppression system
Internal & external armour protection against IED’s and KE weapons
New suspension to cope with the added weight of the new armour, including new steering struts, shocks, torsion bars and drive shaft
Raytheon AN/PAS-13 Improved Thermal Sight System AKA ITSS
A new eye-safe laser range finder, fire-control solutions and far-target location target grid information
The replacement of the existing turret hydraulics with a new electric drive system
The LAV-25 will be then redesignated the LAV-25A2. The LAV-25 has had a very successful service life with the USMC, with the only main complaint being the lack of internal space for personal equipment, however with the new up-grades the LAV-25 is expected to remain in service with the USMC until 2024.

The LAV family of vehicles has since grown from its introduction by MOWAG as the Piranha in the 1970’s due to its flexibility, adaptability & light weight, making it easy to transport/deploy via aircraft (including by helicopter) and is in service with many countries under many other designations and wheel variants other than 8×8, such as 4×4 and 6×6. The LAV-25 is a good example of this with Saudi Arabia using many variants including a 120mm mortar system. Other LAV’s include the 1988 production of the GM Defence turret less Bison APC, which entered service with the Canadian Militia, Australia and the US National Guard. Since 1999 the LAV-25 was further developed with the Canadian Army in to the LAV-III and equipped with a similar 25mm main gun. It is in service with Canada, Romania and New Zealand, who designate it the NZLAV and was then further developed in to the US Army Stryker.

GDLS is now dominating the market of LAV variants and vehicles since it’s purchase of MOWAG, Steyr-Daimler-Puch Spezialfahrzeuge (who manufacturer the Pandur 8X8 APC which is in service in Portugal and Austria) & GM Defence, with production also at its Canadian manufacturing facilities.