The Bradley Infantry Fighting Vehicle is the primary IFV for the American and Saudi Arabian Armies. The Bradley is named after General Omar Nelson Bradley (1893 – 1981), who served as a brigadier general and major general for the United States in World War II. It entered service with the American Armies in 1981 as a replacement to the widely used M113. The Bradley has two designations, the M2 and M3.

The M2 is the infantry version and primarily used to transport troops into battle, it has a crew of three and a six-man infantry squad (7 in A2 & A3 upgrade) and secondly to provide that squad with fire support.

Since its introduction in 1981 there have been several upgrades.

The M2A1 Bradley: entered service in 1986 with an improved TOW rocket system, NBC system and a fire suppression system.

The M2A2 Bradley: Introduced in 1988, it had new ammo storage, a new 600hp engine fitted and new armour to withstand a 30mm round or Rocket Propelled Grenade. All Bradleys bought up to this standard.

The M2A2 ODS Bradley: Incorporates improvements identified after Operation Desert Storm, including an eye-safe laser rangefinder, global positioning and navigation systems and an enhanced driver’s vision device. It is aka Bradley A2 ODS.

The M2A2 ODS-SA Bradley: (The SA standing for Situational Awareness) An M2A2 ODS Bradley, but fitted with an aplique FBCB2 digital communication platform. It is aka Bradley A2 ODS-SA and started to enter service in 2012 onwards.

The Bradley’s main weapon is the M242 25mm “Bushmaster” Chain Gun, manufactured by McDonnell Douglas. It is able to fire either armour piercing or high explosive ammunition and the gunner can choose either by flicking a switch thanks to its integrated dual-feed mechanism and may fire semi or fully automatically at the rate of 200 rounds per minute and a range of 2000 meters depending on the ammunition used. It also has a coaxial M240C 7.62mm machine gun.

The M242 is capable of taking out other APC’s and for close encounters with MBT’s, the Bradley relays on its Raytheon TOW BGM-71 missile system. The launcher carries two missiles and is mounted on the left side of the turret. The TOW anti-tank missile system is wire guided, meaning that the crew of the Bradley are able to guide the missile on to its target via its on board controls which send signals to the missile via these wire’s and making it extremely accurate. The Tow missiles have a range of almost four kilometres. The three-man crew will then reload the launcher with missiles stored in the main compartment. The only disadvantage of the TOW system is, that it cannot fire whilst on the move and the Bradley then becomes an easier stationary target.

The gunner is equipped with a Raytheon Integrated Sight Unit (ISU), which includes a day/thermal sight of magnification x4 and x12 and an optical relay to send the image of the gunner’s sight to the commander. The gunner also has periscopes for forward and side observation. A daytime sight system for the gunner or commander is provided as backup to the primary sight.

The A3 upgrade has has seen improvments in the Sighting and communication/networking equipment. A new Raytheon Independant Commanders Sight and the DRS Technologies Improved Bradley Acquisition Subsystem for the TOW system have been installed. Both systems use new second generation thermal imagers, whilst the IBAS has a day channel, automatic dual target tracking and eyesafe laser rangefinder.

The electronics system includes a databus with central processors and digital information displays for commander, driver and squad leader. Since 2004 an aplique FBCB2 has been installed which is intergrated in to the Commander’s Tactical Display.

FBCB2 is a digital communication platform designed for commanders to track friendly forces (via GPS tracking installed in friendly vehicles) and displaying them graphically on a computer animated battlefield monitor in the commanders station, instead of him collecting this information verbally over a radio and relying on visual confirmation. Integrated with the BFT it can also receive data such as enemy forces located by other units/vehicles equipped with FBCB2/BFT or Ground Surveillance Radar’s & UAV’s, which is also graphically displayed on the commanders computer animated battlefield monitor. This allows the commander to be aware of what is happening around his vehicle and others in real time.

It also allows command operation centre’s either behind the lines or even in the US, to monitor the location of its and the enemies forces, so they can be co-ordinated in a joint effort to defeat those enemy forces. Changes to orders can be made instantly to all vehicles as the FBCB2 can also receive e-mail. It also considerably reduces accidental friendly fire AKA blue on blue (hence the word blue in BFT) as commanders are aware of friendly units rather than relying on visual confirmation which is difficult through a thermal sight! These systems have been developed since the mid to late 90’s in a previous reshaping plan called Force XXI AKA Task Force 21 and is gradually being integrated in to US vehicles through its current modernization program.

A slave monitor is in the Squad Leader’s station so that he can monitor the FBCB2 and imagery from the IBAS, CIV, or Driver’s Vision Enhancer.

The Bradley’s construction is of all welded aluminium, with a laminated armour. appliqué steel plates were added to this on the A2 upgrade protecting against 30mm rounds over the frontal Arc.

300+ new ERA kits were ordered for the Bradley by 2005. Each kit consists of 96 tiles covering the forward and sections of the vehicle. In 2008 BAE Systems was awarded a contract to install improvised explosive device (IED) mine armour on 433 Bradley M2/M3 vehicles.

The vehicle has a smoke screen generator as well as smoke grenade launchers on either side of turret.

The kit includes metal mesh to cover the sighting equipment, highly powered spot light and a non-conductive ‘dome tent’ structure to protect turret and crew from low-hanging electrical power lines. A new fire detection system and blast obsorbing seats are also have now been included to the kit and its believed a new commanders RWS mounting a 7.62mm MG is being developed. BAE Systems receieved an order for 952 kits in January 2008.

Syracuse Research Corporation is supplying an electronic warfare system called CREW-2, which is designed (just like the systems on the Challenger 2) to jam the signals of cell phones / pager’s / short range hand held radio’s / remote’s of car alarm’s used to active IED’s, which are normally placed along roads to attack Armoured Fighting Vehicles like the Bradley. 1691 systems have been ordered for the Bradley. 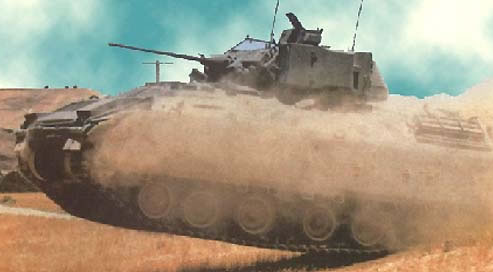 With the increased weight which slows the speed Bradley, its original 500hp engine was replaced in the A2 series with a 600hp VTA-903T engine from Cummins Engine Co, improving its cross country performance and allowing it to easily keep up with Abrams MBT’s, providing a maximum speed of 61km/h, which was also a main purpose for the swap to the Bradley’s from the M113’s which couldn’t keep up with the Abrams.

Another noticeable difference with the Bradley from other APC’s is its amphibious capabilities. The original version had a water barrier, which is erected by the crew before entering the water and took 30 minutes to erect. This system has been upgraded to an inflatable pontoon, which fits on the front and sides of the vehicle. This pontoon is inflated in about 15 minutes, and is continuously pressurized during operation. It can reach a maximum speed of 7.2km/h in water. Other differences include openings along its sides to mount a number of M231 firing ports. These were cut from 6 ports to 2 in the A2 series.

Aka the A3 BFIST, it is based on an M2A3 Bradley IFV, the TOW Anti-Tank launcher mounted on the left of the turret has been replaced with the Fire Support Sensor System (FS3) used for Target Location and Designation of up to 20km, which it is able to do whilst on the move.

Short Range air defense variant. the TOW Anti-Tank launcher mounted on the left of the turret had been replaced with a Stinger Surface-to-Air Missile launcher (x4 firing tubes). Withdrawn from service some time after 2006.

Note: The manufacturer BAE Systems refers to the M2A3 Bradley as the A3 Bradley now.

The Bradley Family of Vehicles (BFoV) developed by BAE Systems: “is the most capable and cost effective platform for replacement of the M113. The BFoV common chassis solution is a simple, low cost, low risk, Military-off-the-Shelf solution to replace the M113 FoV in the Heavy Brigade Combat Team (HBCT)”.

The BCP is a Bradley A3 based variant which operates in the forward area with armored and mechanized battalions. The BCP is equipped with approved and fielded C2 and C4ISR technologies supporting the net centric operations on the move with enhanced network connectivity consisting of Beyond Line Of Sight (BLOS) voice, video and data over classified and sensitive but unclassified networks.

The AMEV provides increased interior space for all the equipment and supplies required to perform the medic’s duties while providing  protection of the M2A3 Bradley.

The Bradley Mortar Vehicle is a M2A3 Bradley based variant which provides immediate 120mm Mortar fire support to the Heavy Brigade Combat Team (HBCT). Its stowage system enables the BMV to carry over 115 rounds of 120mm ammunition,

The AMTV provides the capability to deploy forward surgical teams closer to the point of injury, allowing advanced trauma management and intervention treatment that save lives on today’s battlefield. The AMTV provides the same survivability levels to the crew and patient as the Bradley A3. The AMTV is equipped with a quick erectable shelter to provide triage space for long term stationary operation. The AMTV provides over six feet of interior height for the medic, physician or PA to operate.

A total of 6720 Bradley’s have been manufactured.

Unitied States of America: The US Army & National Guard is continuing to upgrade its M2A2 Bradley (and M3A2) fleet and M7 Bradley Fire Support Team vehicles to both the M2A3 and The M2A2 ODS-SA Bradley. BAE last announced a number of upgrade contracts in 2012 for both upgrades. There was also talk from congress in 2013 of shutting down the Bradley Industrial Base, Linda Hudson for 3 years to save money.

The vehicle served the US Army in both the Gulf War and Invasion of Iraq in 2003. A number were lost in both conflicts to blue on blue (Gulf War) and IED attacks during the Ocupation of Iraq following its invasion. The Bradley actually scored a higher tank kill during the Gulf War than the M1A1 Abrams Main Battle Tank

The M2 Bradley Based Vehicles

Multi-Purpose Vehicle Program – Bradley based vehicle developed by BAE for the US Army to replace the M113 APC. In development and trial stage as of December 2014.

Egyptian Infantry Fighting Vehicle – The EIFV is fitted with the M2 Bradley turret.