Development started in 1995 to meet the needs of the Finnish Army for a replacement of  the Patria Pasi 6×6 APC aka XA-180 series. Trials with the Finnish Army started in 2003 and orders  for the vehicle placed with its Finnish Manufacturer Patria in the same year. Its now in service with 7 countries and being trialled in outhers.

The Finnish Patria AMV 8×8 has been developed to provide optimal modularity of components and to be adaptable for a wide range of versions without changing basic vehicle systems. Patria AMV is available in three different models:

The AMV has hit the ground running as a 4th Generation (Modular construction) Fighting Vehicle and already developed a fearsome reputation in the War in Afghanistan and is dubbed “The Green Devil” by the Taliban and it’s already over taken its European competitors on the export market.

Though some AMV’s are produced by Patria, the company has also signed agreements with various companies in several countries for the licensed production of the AMV (the company uses Patria’s intellectual property design) for domestic and export market. The end user agreement (like all licence built military vehicles) means Patria has the right to say if signifcant modifications can be made and which countries the licensed producer can sell their AMV’s too.

Croatia – Croatian company Đuro Đaković produced the AMV for the Croatian Army. They signed an agreement for a common effort in sales of Patria AMV vehicles to case-by-case selected third countries in 2011 and finalised in 2012, meaning the comapny can produce the AMV for export.

Poland – Polish company WZM S.A. initally signed an agreement to produce the AMV aka Rosomak in 2002/2003. In July 2013 a new licence agreement was signed and under the terms of the new contract WZM receives license rights to manufacture Rosomaks until 2023 and maintenance rights until 2052. Patria retains the full rights to the Rosomak and continues as the sole source provider of the most critical vehicle components. 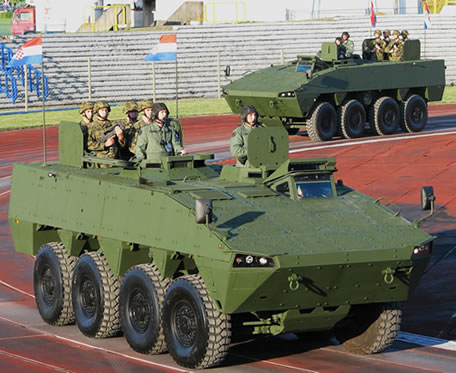 The AMV entered service with the Croatian Army in 2008. A total of 126 Patria AMVs have been delivered to Croatia. They were built under licence by Croatian Firm Đuro Đaković. 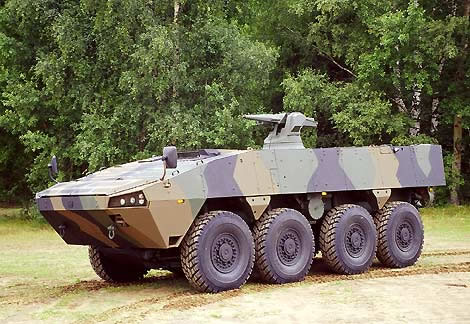 Developed for its own requirements as a replacement of the 6×6 Patria Pasi, they use two models, the standard APC  is designated the XA-360 and mounts the established PROTECTOR M151 Remote Weapon Station which can be mounted with either the M2 .50cal MG or the Heckler & Koch GMG automatic grenade launcher. The second model is the XA-361 and is equipped with the Patria Nemo remote-controlled 120mm mortar turret. 62 XA-360 APC and 18 XA-361 are in Finnish Army service. 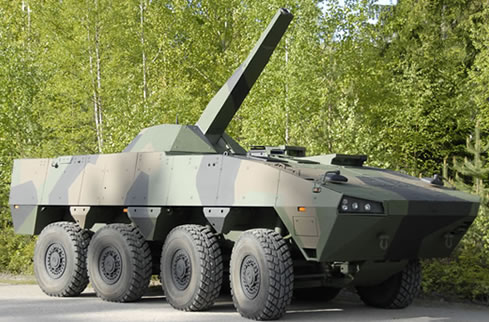 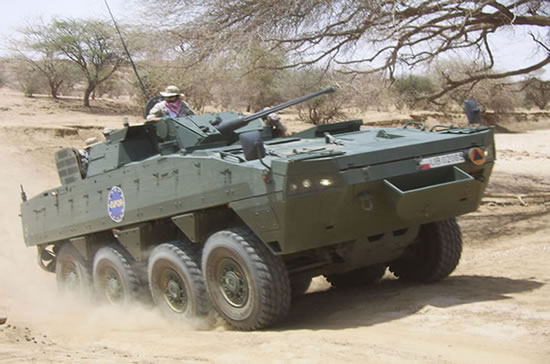 As the largest operator and licensed manufacturer, their modified models have seen active service and come under fire in Afghanistan and Chad, developing a great deal of respect from their enemies.

Designated the Kołowy Transporter Opancerzony Rosomak which translates into Wheeled Armoured Vehicle “Wolverine”, the KTO Rosomak will replace the ageing OT-64 SKOT 8×8 wheeled APC, which being amphibious has required the Rosomak to also be fitted with amphibious (unlike other AMV’s) equipment.

The standard combat vehicle entered service in 2004 and is equipped with a two man turret (gunner & commander). Designed by Italian firm Oto Melara, the Hitfist-30P turret is equipped with a 30mm ATK Mk 44 chain gun and a coaxial 7.62mm Polish UKM-2000 MG. The 30mm main gun is controlled by a modern FCS and thermal sights.

For fighting in Afghanistan, there have been two types of modifications to the combat vehicles. The first is the M1. It includes greater situational awareness (externally mounted CCTV with monitors for the commander) and further steel plate inserts of the modular armour. The additional weight has restricted the vehicles operations to not include amphibious capabilities. The second modified vehicle is the M3. It is the M1 but is equipped with the OSS-D open turret with 40mm belt fed Mk19 grenade launcher or the Russian designed WKM-B .50cal MG.

Manufactured by the Polish firm WMZ following the successful acquisition in 2002 of its licence to manufacturer the vehicle, they are subsequently allowed to export.

Including additional order in Jan 2015, The Polish Army will have 977 vehicles when final deliveries are completed in 2019.

135 had been ordered in 2006 and the first vehicle was delivered in June 2009. Production was under licence with Slovenian company Indop. However only 30 were built after legal issues. In 2012 Patria signed a settlement with Indop offseting the original licencing agreement. The 30 AMV will remian in service, no further orders are expected and Patria will now provide life cycle support. 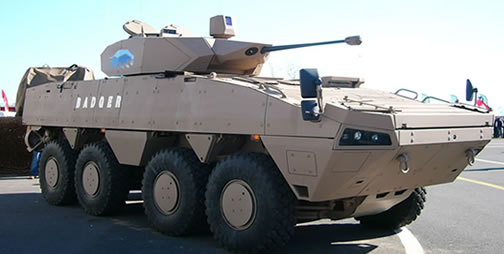 In November 2013, Denel Land Systems and Patria signed a contract for the serial production and delivery of Patria AMVs to the South African National Defence Force. The contract includes 238 vehicles; of which five prototype series vehicles were already delivered during the development phase of the project. Patria will handle production of the first 16 vehicles.

Thereafter, serial production will be moved to South Africa, with Denel Land Systems being responsible for the production and final integration of the vehicles. In South Africa, Patria AMV is known as Badger.

The Swedish Defence Materiel Administration and Patria signed a contract in June 2009 for 113 Patria AMV for the Swedish Army as part of the project known as AWV 2014. The value of the contract is approximately 240 million EURO’s.

The purchase had been halted after BAE Hagglunds who had been developing a similar line of Modular tracked & wheeled vehicles for Sweden went to court claiming issues with competition biding and procurement process by the Swedish Defence Materiel Administration.

In November 2010 The Administrative Court of Stockholm announced the Swedish Defence Materiel Administration had conducted the armoured wheeled vehicle tender in accordance with the act on public procurement. The first vehicles were delivered in March 2013 and there is an option for another 113 vehicles.

Operating the largest fleet of BMP-3 (600) an AMV mounting the BMP-3’s turret was publicly displayed in the UAE. If this combination was chosen it would help maintain a good supply chain with only one type of munitions required. The BMP-3 turret mounts a 100mm main gun which can fire anti-tank missiles and has a 30mm auto cannon. Its expected that the AMV will work along side the BMP-3 but offer a greater level of mobility, however the UAE is keeping important information about the purchase close to its chest and including if it will be building the vehicle under licence at the same time as production in Finland.

In 2013 Croatian AMV licenced producer Đuro’s Patria announced they had sent a AMV to Kuwait for final testing. Kuwait currently operates a number of wheeled APC.

In order to save on costs incurred of carrying out field trials, the country has stated it would like to purchase the same AMV neighbour Croatia has licence produced for its own army. Its beleived that talks were still on-going in 2014. The number to be bought has yet to be publicly announced.

The army operates the Polish Twardy Tank. It held field trials in 2006 of the Rosomak supplied by Polish licenced producer WZM S.A.

Patria and Lockheed Martin have agreed to cooperate in the competition for the US Marines MPC (Marine Personnel Carrier) program that is set to replace the LAV-25. The USMC is planning to obtain 600 MPC vehicles.

Patria will deliver the AMV 8×8 vehicle. Lockheed Martin Systems Integration is responsible for the MPC offer, as well as system integration, survivability systems, the US production line, as well as networking and logistics.

The new hybrid is called the HAVOC.

In June 2013 the Marine Corps officially put the MPC program on hold. In February 2014 the project was back on, now known as Amphibious Combat Vehicle (ACV) Phase I program.

It has a 3 man crew (commander, driver, gunner) 8 troops