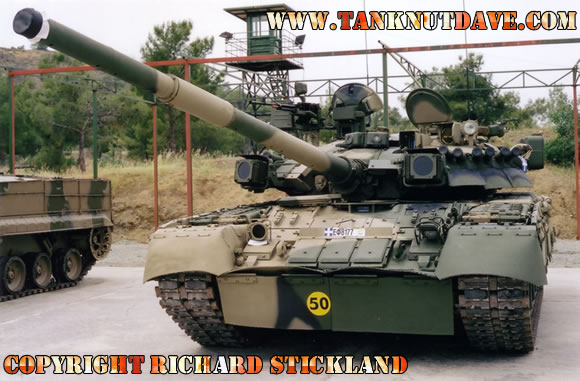 WhenThe Russian T-80 Tank entered service in the former U.S.S.R in the late 1970’s, many NATO countries confused it as the T-72. It did have the same self loading carousel that reduced the crew size down to three men as used in the T-72 as well as the use of reactive armour on the turret, but mechanically it was a different tank.

The T-80 started out as an improved version of the highly successful T-64 and was designed and produced by the SKB-2 design bureau at the Kirov arm’s factory in Leningrad. One of the design improvements was the introduction of a gas turbine engine (the GTD-1000T and GTD-1000TF) and the T-80 was the first tank in the world to be fitted with one. One of the other improvements made was to the suspension system by using components from the T-72’s. The T-80 is a much smaller and lighter MBT than that of NATO countries MBT’s at the time and current one’s, weighting only 46 ton’s on average.

In 1985 the T-80 went through a major upgrade program at the SKB-2 arm’s factory in Leningrad. It received a new type of reactive armour called “Kontakt-5” and is able to withstand modern armour-piercing fin-stabilized discarding sabot rounds. Its former secondary weapon, a remotely controlled commanders MG was replaced with a pintle-mounted one and fitted with the Brod-M deep wading equipment. The biggest change was the replacement of the old gas turbine engines, which drank fuel at an alarming rate and limited its operational distance. It was fitted with the GTD-1250 three-shaft engine, with two cascades of turbo compression producing 1250hp and with its lightweight it has earn’t the nickname as the “flying tank” and was redesignated as the T-80U.

Whilst the T-80U program was happening, the Morozov Design Bureau in Ukraine was developing a diesel-powered version, designated the T-80UD (“D” for diesel). It took on all the main improvements of the T-80U with a few exceptions such as keeping the secondary weapon, the commanders MG as remotely controlled. It is also able to fire from its 125mm 2A46 smoothbore main cannon the improved wire guided 9M119 Svir missile and of course not using a gas turbine engine. Instead it was fitted with a 1000-hp 6TD-1 6-cylinder multi-fuel two-stroke turbo-piston diesel engine, which gives it a far better fuel efficiency and a longer operational range than T-80’s with turbine engines.

Between 1987 to1991, roughly 500 T-80UD tanks were built at the Ukrainian Malyshev Factory, but when the wall fell in Germany and the U.S.S.R broke up, 300 of them were still at the factory and are more commonly seen in the Ukrainian Army rather than in the Russian Army.

The future of the T-80U & T-80UD is turbulent. It has had many upgrades and versions built. The Russian Army are moving towards using the T-90 after the T-80’s high fuel consumption and poor combat performance in the Two Chechnya Wars. Exports of the T-80UD have been slow, mostly due to Russia not supplying The Ukraine with turrets and technology, which was resolved by the development of domestic components. As a result Pakistan ordered over 300 of them between 1997 to 1999. With the development of domestic components and independence in tank building the Ukrainians have now developed an improved version of the T-80UD, designated the T-84 for export. The T-80 series are still in service with a number of countries including: Belarus, Cyprus and Russia.

T-80: the original production model, which was only produced in very small numbers.
T-80B: was the first mass produced variant.
T-80BK: was the command variant of the T – 80B. It was equipped added communications equipment.
T-80BV: was the variant first fitted with Explosive Reactive Armour.
T-80BVK: was the command variant of the T – 80BV. It was equipped added communications equipment.
T-80U: was the variant that had the biggest overhaul. It saw changes to the secondary weapons, new engine decking, new armour, vision equipment and commanders’ equipment.
T-80UD: saw the replacement of the gas turbine engine with a diesel.
T-80UK: was the command version of the T – 80U.
T-80UE: was the same as the T – 80UK but without the command equipment. It did retain the Shtora-1 system (IR jammer to defeat guided missiles).
T-80UM: saw the replacement of the diesel engine to a new 1250hp gas turbine.
T-80UM1: has the Shtora-1 system fitted and the gas turbine beefed up.
T-80UM2: was fitted with a new cast turret.
BREM-80: is the T – 80’s armoured recovery vehicle.